The prices depend on the modules, contact us for more details about the products.

Beamqus offers a DFB interband cascade laser (ICL) at any target wavelength in the mid-infrared (MIR) between 3 μm and 6 μm. The device operates in continuous wave (cw) mode around room temperature. Specifications and behavior are very comparable to a nanoplus laser at lower wavelengths. When you set up an ICL-based analyzer, you can, hence, transfer the engineering knowledge you have gained from building short-wavelength gas sensors.

In the 3 μm to 6 μm wavelength window, now covered by interband cascade lasers, many industrially relevant trace gases have their strongest absorption bands. They show absorption strengths that are several orders of magnitude higher than those in other infrared (IR) areas. This concerns prevalent molecules such as carbon dioxide (CO2), nitric oxide (NO) or water (H2O). Most hydrocarbons, e. g. methane, equally locate their topmost absorbing features at these ICL wavelengths.

accelerate the sensing speed
reduce the noise and
miniaturize the sensor.
nanoplus ICLs are considered for various progressive applications in industry and research. In the oil and gas sector, they enable accurate process control and support higher energy efficiency and pollutant reduction.

Compared to other sensing techniques, such as gas chromatography, TLAS-based sensors offer the unmatched advantage of real-time analysis.

While GaSb-based type I interband diodes have the disadvantage of decreasing hole confinement and increasing Auger recombination, fast phonon scattering loss impairs the use of intersubband QCLs.

An interband cascade laser, in contrast, uses optical transitions between an electron state in the conduction band and a hole state in the valence band in a cascade of Sb-based type-II QW structures. A broken-gap band edge alignment enables the tailoring of the emission wavelength by altering the cascade structures.

Interband-cascade technology is ideal for high-performance lasing in the entire range from 3 μm to
6 μm due to relatively wavelength-independent threshold powers. It combines high performance with reasonably low power consumption. Like all nanoplus lasers, these devices are manufactured without epitaxial overgrowth, avoiding impairment of ICL performance due to the insertion of patterning-induced defects within the laser layers.

beamqus DFB lasers show outstanding spectral, tuning and electrical properties. They are demonstrated in figures 1 – 3. Click on the graphics to enlarge.

Free space mounting
beamqus developed a specific free space package for interband cascade lasers. The TO66 header disposes of an extra large thermo-electric cooler. It is hermetically sealed with a black cap and anti reflection coated window. Please click on the mounting for detailed specifications and dimensions. 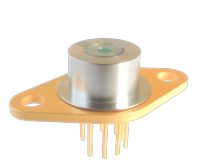 TO66 header
with TEC
and thermistor,
black cap and
AR coated window

Carbon dioxide, nitric oxide, water vapour and most hydrocarbons, like methane, acetylene, formaldehyde and ethane have their strongest absorption features between 3000 nm and 6000 nm. 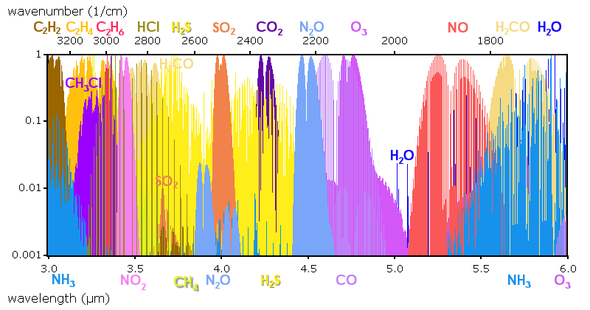